An American in Brno 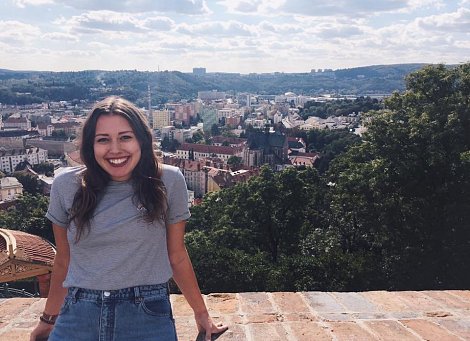 Coming to live and study in Brno was a long planning process. It took me several months. When I finally arrived at the bus station after a long way from the United States, I felt like all the planning was finally coming together. So far living in Brno has been an amazing experience and I have learned so much about Czech culture.

My hometown in America is a small village called Exeter in the state of Nebraska. It is near the Wilbur, which is also called the ‘Czech Capital of the USA,' because of a large population of the community, about thirty-nine %, claim Czech ancestry. Each summer the community is hosting a large celebration called Czech Days. At this festival, you can find Czech food, which mostly consisted of duck, dumplings, pork and sauerkraut. A lot of beer is served and consumed there, and they have a polka band so the people can dance.

I chose to study in Brno because I heard good things about the city and had some prior knowledge about Czech culture. At the University of Kansas I study journalism and public policy, here I am studying media studies and political science. Another reason was the low cost of living expenses. I always had heard beer is cheaper than water, and I thought it was just a myth or a joke, but now I know that it is a very true statement.

I would be lying if I said I haven’t run into problems with the Czech language. The first week I was here, I purchased men’s shampoo instead of women’s condi­tioner, and fabric softener instead of laundry detergent. Going to the grocery store is no simple and ordinary task for me either because most of the time I have no idea what I’m buying. Checking out at the grocery store is another issue because I never know what the cashier is saying to me. I just smile and nod and try not to seem like too much of a foreigner.

Trams were stressing me out

Another aspect of life that is very different is the public transit system. Only in the largest metropolitan cities in America, there are public transportation systems. When I first arrived, I had no idea how to use and navigate the tram and bus systems. It was so stressful! However, it only took me a few weeks to get used to the system and now I am a pro. In fact, I wish my city had public transit because it is a lot more efficient. In America, having a car and being able to drive everywhere is absolutely essential in most places.

The school system is significantly different for me as I am used to all the university buildings being on campus in one place. My classes are usually each taught two-three days a week. Here, each class is one day per week. This gives me a lot more free time during the week. In America, most students usually take five courses a semester, which means that you are in class almost all day every day.

I love Brno's central location that makes it easy to travel around. So far I have been to Norway, Sweden, Germany, Austria, and Slovakia. Since the USA is such a big country and everything is so spread out, it is not very common to leave the country for a weekend trip. It is more difficult for us Americans to get to Europe. Therefore, I want to travel around as much as I can while I’m here. Who knows when I will have the opportunity to come back again? But I have adjusted to life in Brno very well. It feels like home already.